To be continued :
Game guide 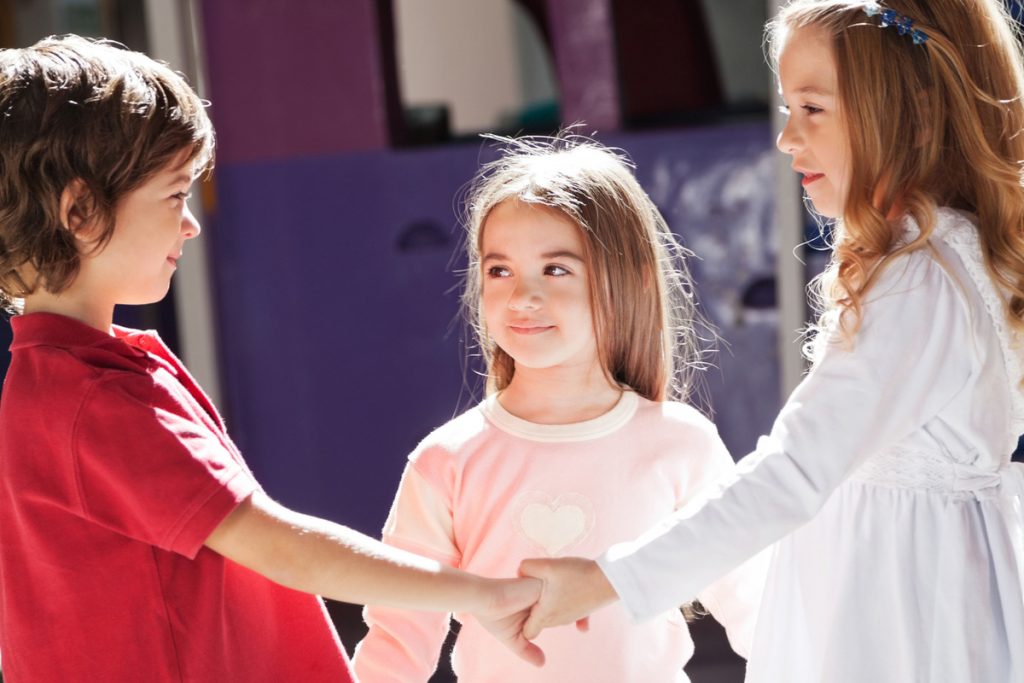 It pains me when I play the victim, so I think of something funny.
Francisco, 9 years old
Empathies
Empathies modified by the J3F
Empathy and NE
Teachers' words

Imagine a boat as children draw: the hull, the passenger cabins, and everything above the chimney. 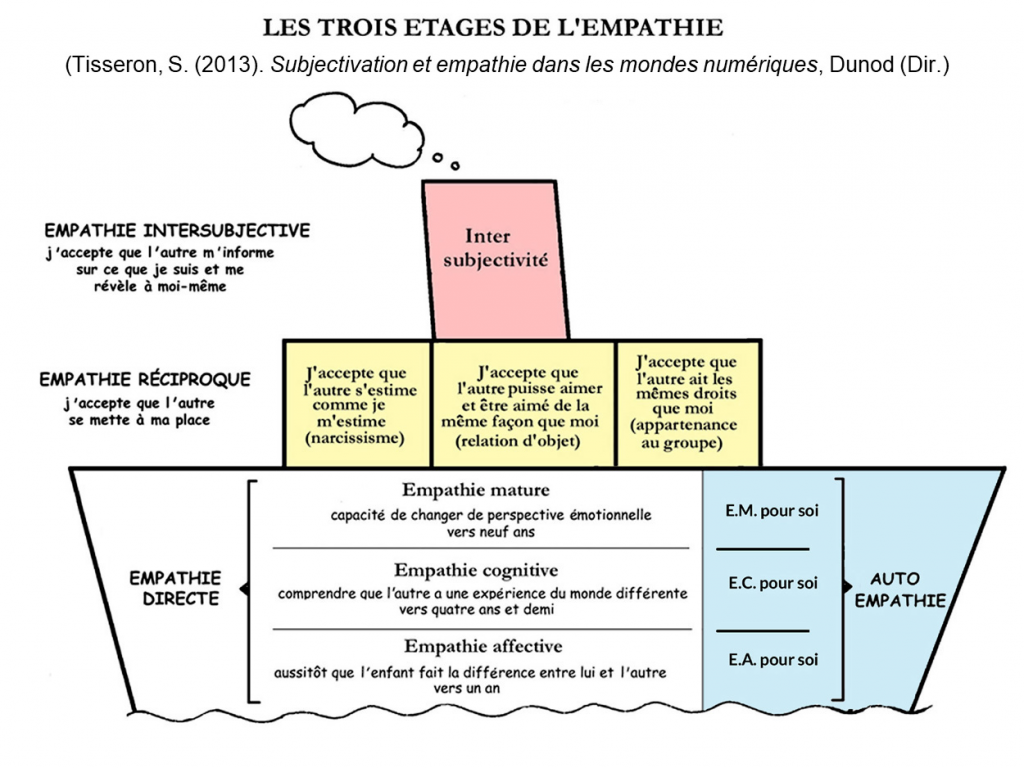 The stages of building empathy

direct empathy is represented by the hull of the boat. All boats indeed have a hull, and all humans possess this ability to a greater or lesser extent. It consists of three stages: affective empathy which allows from the age of one to recognize the emotion of the other, and by responding to it, to create an emotional sharing; cognitive empathy which makes it possible to understand, from the age of four and a half, that the other is different from oneself; finally, “mature” empathy which allows, from the age of nine, to put oneself emotionally in the place of the other by changing their emotional perspective. This third and final dimension of direct empathy is a conscious process that needs to be supported and encouraged, especially during adolescence.

Self-empathy (or empathy for oneself) is also part of the "shell" because its construction follows the same steps as the construction of direct empathy. It consists of identifying one's own emotions and psychic states, accepting them and giving them meaning.

mutual empathy is represented by the deck and the passenger cabins. It corresponds to the way in which a person recognizes in another what he recognizes for himself, both in the areas of self-esteem, the right to love and be loved, and citizenship rights. . It holds the key to the moral sense.

Intersubjective empathy is represented by the fireplace. When she smokes, the boat is moving forward! It consists in recognizing in the other the possibility of informing myself usefully about aspects of myself still unknown to me, of discovering myself, and of moving forward. She could well hold the key to happiness...

Empathies modified by the J3F

the J3F helps to promote the identification of facial expressions corresponding to the basic emotions. Indeed, the departure ritual which invites children to act out simple emotions allows each child to take the time to align themselves with those of their classmates, and to discover in their eyes the fact that they have succeeded (see "Mimics").

The children are invited not only to mime emotions in the preparatory phase, but also to name those that are experienced by the different protagonists, such as joy, anger, fear or sadness, as well as the more moral one of guilt. . In general, the naming of the intentions of the different protagonists during the construction of the scenario makes it possible to better understand the mental states of the other. This characteristic is reinforced by the fact that, in the game itself, each action is accompanied by words that make sense.

the J3F reinforces the shift in emotional perspective

This ability is reinforced by the fact that each child is invited to change their point of view when they change the role. This change of point of view is also spontaneously materialized by the children, who come to place themselves in the space where the previous ones were held. For example, if an aggressor first placed himself against the window and his victim on the side of the door, when they change roles, experience shows that the one who first played the role of victim will assume the role of the aggressor by going to stand in turn near the window.

The shift in emotional perspective is also illustrated by another observation. Experience has shown that children develop as part of the J3F support strategies for each other. Thus the "prompters" come to overcome the difficulties of memorization of their comrades. And in the class welcoming an autistic child without language, this one could play while another lent him his voice.

the J3F often stages situations of tension or aggression in which the victim never remains silent and formulates his protest. This rule aims to allow children to no longer allow themselves to be mistreated without protesting. This ability contributes to the construction of self-empathy, in other words the ability to identify one's own emotions and to help oneself by expressing them (“Ouch! You are hurting me!”). Let's not forget either that a victim more easily denounces an aggression to a third party (a teacher, an educator, a psychologist or a doctor) when she first verbalizes it to her attacker himself.

When each child is invited to adopt the point of view of the other by taking on his role, he at the same time abandons the role he has just played to another child. He thus stages the fact of accepting that the other takes his place.

the J3F does not affect intersubjective empathy

This last component of empathy is not modified by the J3F since no child is invited to comment on the attitudes of the other participants, and that the professionals animating the game are also prohibited from doing so.

Building empathy is valued in the Health Educational Path drawn up by the Ministry of National Education for the attention of teaching and educational teams. It finds its place alongside attention to others and involvement in joint work, self-awareness and the management of stress and emotions (appendix 2, pages 23-24).

“This Game is really revealing of the relationships and interactions between children. »

“There are far fewer fights and verbal abuse both in the classroom and in the yard. »

“I realized that the students knew how to organize themselves better than I thought! Now, I leave them more initiative in the class. »

“The shyest children have gained confidence and dare to come see the teacher when they are bothered. »

“I see the children who are starting to talk to each other. »

“Overall, we can say that the class climate is more peaceful and that the rules of life are better internalized. »

“I don't know to what extent the 3FG makes students change, but for me, it has led me to see my students differently, and to trust them more! »

“When there is a conflict in court, dialogue becomes a tool, and the vocabulary changes. »

“Two students who did not dare to speak have significantly changed their position in the group: they now dare to assert themselves, even to oppose some of their classmates. They took up a full place in the class. »

“A difficult and inward-looking student has a more calm, less anxious attitude (he no longer soliloquizes...) especially since he was able to speak to his teacher (at the end of March) about the pressure that another student of the class had been practicing on him for over a month. »

“A pupil who, in the class, displays the image of a “tough man” found himself worrying about the fate of the victim during the game in which he was the aggressor! »

“Students have told me that this activity strengthens the cohesion between them: “Sometimes we are not always together, we are not nice to others”, “Here, we play together, with others”, “We have a project together, like the webdoc”. »